This page is about the Indiana Religous Freedom Reformation Act (RFRA) as of March 31, 2015

There have been multiple claims by various political figures and even Christian organizations that the Indiana RFRA would not allow for discrimination against lgbt folks and that this misunderstanding is begin caused by so called "radical liberals".  However ... this is not true (unless Tony Perkins and Bryan Fischer have gone liberal) .... See the statements and links below.

“The homosexual lobby has reacted with a spectacular display of hatred and vitriol in the wake of the passage of Indiana’s Religious Freedom Restoration Act (RFRA). This is a law that protects religious liberty for every individual and business in the state.

This bill will keep Indiana from doing what Washington and Colorado are doing to their florists and bakers, which is to punish them for running their businesses according to conscience and Christian principle.”  [ This is a reference to florists and bakers being taken to court for discriminating against gay people and refusing them service]

Tony Perkins of the Family Research Council
(this is about an Arizona RFRA but what he says applies to all RFRA's ... see quote below)

"Under the amended Religious Freedom Restoration Act, what was legislative intent (but ignored by certain courts) would have been clear: individuals do not have to trade their religious freedom for entrance into public commerce. In other words, whether it's a wedding vendor, whose orthodox Christian faith will not allow her to affirm same-sex 'marriage,' or a business like Hobby Lobby or Conestoga Wood, whose faith bars them from providing drugs that have the potential to end a pregnancy, the provisions of RFRA would apply.”  [Again ... Tony makes it clear that he thinks the original RFRA and indeed all RFRA's allow wedding vendors to discriminate against an lgbt couple getting married.]

"• Congress should oppose any effort to put gay and lesbian relationships on an equal legal status with heterosexual marriage.

• Congress should oppose any effort to recognize homosexual’s as a "discreet and insular minority" entitled to the protection of anti-discrimination laws similar to those extended to women and ethnic minorities. 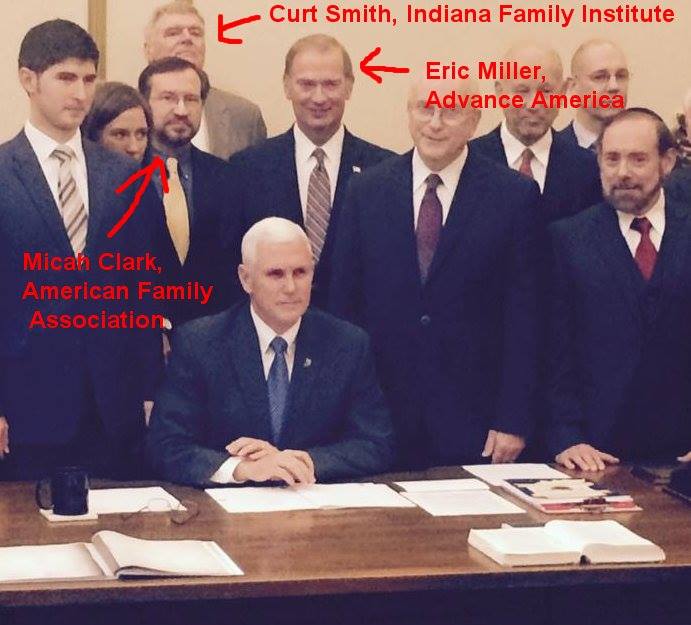 The following is from Advance America … Eric Miller’s Website ….  Eric Miller is in picture of private signing with Governor Pence

SB 101 will help protect religious freedom in Indiana by providing protection for individuals with sincerely held religious beliefs, along with Christian businesses and churches.

SB 101 will help protect individuals, Christian businesses and churches from those supporting homosexual marriages and those supporting government recognition and approval of gender identity (male cross-dressers).

Christian bakers, florists and photographers should not be punished for refusing to participate in a homosexual marriage!

A Christian business should not be punished for refusing to allow a man to use the women’s restroom!”


So unless Bryan Fischer and Tony Perkins have suddenly gone liberal … (not likely) this law is about exactly what the so called liberals say it is about … denying service to gay folks who are seeking to get married.

This ends the point I wanted to make … but if you want to understand more about this law see below..

Summary … There is a lot of denial politically and otherwise that this law is not about discrimination.  The Alliance Defending Freedom site claims these laws are just like the RFRA of 1993 and have never been used to discriminate.  Well first of all its not … it officially empowers corporations to use their beliefs to deny service.   Secondly … what they don’t tell you is that Indiana’s RFRA is the first one to be attempted after the Hobby Lobby Case in which the Supreme Court said that Hobby Lobby (a non-private business … not connected to a church) could refuse the Government’s health care plan due to contraception/abortion being part of the plan.  So they (Hobby Lobby) won the right to do this and to discriminate against their employees who may have wanted contraception/abortion to be part of the plan.  So if it’s a question of who wins their right for religious freedom and a case of government versus corporation … the corporation wins.  It’s a victory depending on what your religious moral  view is and depending on whether you are the business or the employee.

The new cases or potential cases take this a step further and use it to overshadow business that serve in the public square.

Business in the public square usually cannot discriminate despite the sign you might see in their window.  They typically can only discriminate if a customer is disrupting them in doing their business.  For example a restaurant in California could not discriminate by allowing straight couples to use a private table but not allowing a gay couple to use it … as doing so did not interfere with them providing the service.  A funeral service got in trouble because they ignored the family’s wishes and allowed people to the funeral that disrupted their grieving process.

Here’s another problem.  You have probably already heard from the Alliance Defending Freedom site and others that the RFRA never mentions lgbt folks or lgbt weddings.  That’s because the clever politicians knew it would get them in trouble.  So they wrote it very broadly NOT specifiying a particular belief but allowing it to ANY belief that the business owner has.   So guess what … it might be a belief against what you believe as a conservative Christians that gets discriminated against.  There are plenty of angry people that may do just that.  And personally … I don’t blame them.  Our faith is not a club to use to deny service to others.  Our faith is supposed to be welcoming to others and show love and graciousness.  This is what the great commission is all about.  But if you want to use your beliefs as a club to hurt others with … don’t be surprised if they use it against you.  There are some pretty simple biblical principles here … Do unto others as you would have them do unto you.   And Matthew 7  … With the same measure you use it will be measured back to you.

Believe and follow whatever you want with this fellow Christians … but understand that so called  religious freedom to deny service is a two way street.

Note: I am not interested in having yet another debate on whether this law is right or not … I am more concerned about Christian groups lying to fellow Christians.  If Alliance defending Freedom or anyone else wants to use a law to discriminate then say so … Stop lying to fellow brothers and sisters in Christ.  Be aware that this is my main discussion concern for this post … I may delete those comments that are either deemed hateful by me or that stray from the main concern …Why are we being lied to?
Powered by